Yuki “Lin” Hayashi
Bass Player / Arranger / Music Director
Yuki “Lin” Hayashi was born in 1983 in Chiba, Japan. From 2001 to 2003, he studied bass guitar performance and music theory with some of Japan’s top musicians such as Tsuyoshi Takayama and Greg Lee at Tokyo Music & Media Arts SHOBI.

In 2004, Yuki made his major-label debut with the popular Japanese rock band LEXY through Universal Music Japan. LEXY’s debut single “My Pace” got used as the ending theme song for Ongaku Senshi Music Fighter, a popular weekly television show by Nippon Television which aired nationally from 2004 to 2010. 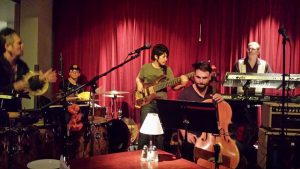 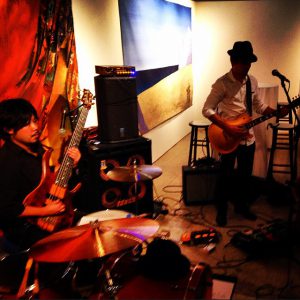 In 2010, Yuki released his own album “Now I Know” through April Records under the moniker “Lin”. The album received a positive review from JazzLife, Japan’s leading jazz magazine.

In 2011, Yuki produced the singer Junko Kurosaki’s album “Jerish”. Three songs from the album, all of which Yuki produced, arranged and played on, were selected for the soundtrack for the 2011 film “Ie” (“The House”), which ranked No.3 at the dreampass.jp, a popular indie-film related website.

In 2012, Yuki relocated to Los Angeles. He quickly earned the regular bassist position for several of L.A.’s famed pro jam sessions, at which the city’s best musicians would stop by to
play.

In 2013, Yuki played in the house band for the CD release party for multi-Grammy-winning band Earth, Wind & Fire’s “Now, Then and Forever” album.
In the same year, he started playing with Michael Speaks, who has won 10 Grammy awards for collaborations with Chaka Kahn and others, at venues such as House of Blues and California African American Museum. 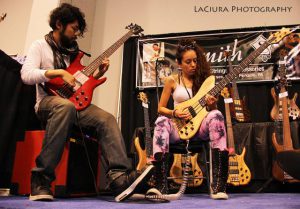 In 2014, Yuki recorded bass for the album “Bueno Vista” by drummer Senri Kawaguchi, one of Japan’s biggest rising stars on drums and a 2017 Jazz Japan Award winner. Yuki also played for Kawaguchi’s showcase live performance in Los Angeles along with Philippe Saisse, a Grammy-nominated French smooth jazz keyboardist.
Since 2014, Yuki has been the regular bass player for “SuperSoul Monday,” the Los Angeles’ renowned weekly music session event. In this event series, Yuki has performed with a number of internationally renowned artists such as John Mayer (winner of seven Grammy Awards) and Thundercat, (Grammy Award winner and collaborator with Flying Lotus, Kendrick Lamar and others).

In 2016, Yuki was the main bass player for the album “It Is” by artist JMSN, whom the R&B singer Usher has named his “favorite new act.”

Also in 2016, Yuki performed in the Grand Park Art Festival in Los Angeles with singer Mario, who has won two Billboard Music Awards and was ranked by Billboard at no. 98 on their “Artist of the Decade” list.
 
In 2017, again, Yuki recorded as the main bass player for JMSN for his fifth album, “Whatever Makes U Happy.” Supporting this album, Yuki went on world-wide tours with JMSN, covering the U.S, Europe, and Asia.

Also 2017, Yuki, along with the members of his longtime band “Loud As Funk,” was the music director and the main bass player for the Japanese rising star trumpeter and King Records artist Chihiro Yamazaki’s album “Sweet Thing.” The album’s success resulted in Yamazaki being on the cover of the October 2017 issue of JazzLife (Japan’s leading jazz magazine) and getting a full feature in the issue.

In 2018, Sound Studio Noah, one of Japan’s biggest rehearsal/recording studio chain, sponsored and hosted a bass workshop seminar in Tokyo with Yuki being the main clinician.
HSU, the bass player for Suchmo, a widely recognized rock group for their Japan’s 2018 World-Cup theme song, joined the event as a guest artist.

Also in 2018, Yuki played with German jazz singer and Werner Music Germany recording artist Leona Berlin in Frankfurt, Germany, as a part of the famed W-Festival.

Yuki is currently the regular bassist for the L.A.-based band “Loud As Funk” and hosts the jam session at Seventy7, Culver City’s favorite speakeasy. The session event is frequently visited by top-class musicians and international stars such as singer Judith Hill. He is also a regular bass player for “Lucky Devils Band,” a successful show band which has won countless awards including WeddingWire’s Couple’s Choice Award and The Knot’s Best of Weddings Award.
Furthermore, Yuki is a current member of renowned drummer Bo Lamar’s “Sanctuary” band, with which he has performed on stage with Thelma Huston (Grammy winner), Melanie Fiona (Grammy winner).